Dr. Duma is the preeminent adult brain tumor surgeon in Orange County, California. He performs the most open craniotomies for brain tumors, performs the most Gamma Knife Radiosurgery procedures, and performs the most surgeries for Parkinson’s Disease and other movement disorders in the region. He is a Diplomate of the American Board of Neurological Surgery, and a Fellow of the American College of Surgeons. He received his general neurosurgical training at Georgetown University Hospital in Washington, DC. He also completed a one-year fellowship at the University of Pittsburgh, Presbyterian Hospital, under the aegis of Dr. Dade Lunsford, in Gamma Knife Radiosurgery and Stereotactic and Functional Neurosurgery.

Dr. Christopher Duma has been performing Gamma Knife treatments since 1990, and CyberKnife™ treatments since 2002, and boasts one of the largest experiences of any Gamma Knife radio/neurosurgeon west of the Mississippi. He treats approximately 250 patients using Gamma Knife or CyberKnife™ technology per year. He also specializes in open surgical management of brain tumors, performing 100-150 craniotomies for tumor per year, and depending on their pathology, their adjunctive treatment with immunotherapy. He was also the neurosurgical consultant for the neurosurgeon character in the television series “Chicago Hope.”

Dr. Duma Brain SurgeonBecause Dr. Duma performs both open, general brain surgery and Gamma Knife radiosurgery, he is uniquely equipped to offer an unbiased and very modern opinion as to how any brain pathology should be managed in Los Angeles County.

Consequently, in lieu of performing open surgery on the brain, the neurosurgeon has the ability to precisely focus high-intensity gamma radiation on a target tumor or vascular malformation. Focused radiation may also be used to treat “functional” disorders such as the tremors resulting from Parkinson’s disease, and the pain syndrome of trigeminal neuralgia. 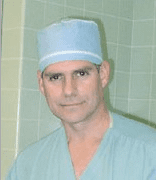